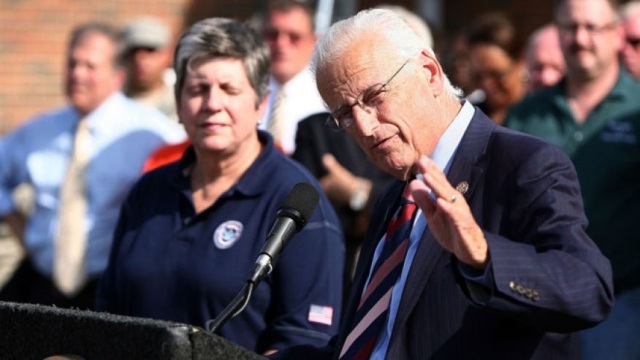 Rep. Bill Pascrell (D-N.J.), seen here with Department of Homeland Security Secretary Janet Napolitano during a press conference in Aug. 2011, has recently sponsored a bill that would quadruple the tax on ammunition if it is passed.

A pair of Democratic lawmakers are proposing steep new taxes on handguns and ammunition, and tying the revenues to programs aimed at preventing gun violence.
Called the “Gun Violence Prevention and Safe Communities Act,” the bill sponsored by William Pascrell, D-N.J., and Danny Davis, D-Ill., would nearly double the current 11 percent tax on handguns, while raising the levy on bullets and cartridges from 11 percent to 50 percent.
“This bill represents a major investment in the protection of our children and our communities, and reflects the long-term societal costs of gun and ammunition purchases in our country,” Pascrell said.

The lawmakers say the bill would generate $600 million per year, which would be used to fund law-enforcement and gun violence prevention.

Critics predicted defeat for the measure.
“What the anti-gun interests can’t ban, they want to tax it out of existence,” Alan Gottlieb, chairman for the Citizens Committee for the Right to Keep and Bear Arms, told FoxNews.com. “It’s nothing more than confiscatory taxation.
“I doubt this bill will pass, but we will lobby against it if need be,” he added. “This is simply another shot against gun owners in this country.”
The bill would exempt all federal, state and local agencies, including police departments, from paying the tax.

The bill would also increase the transfer tax on all weapons (except antique guns) covered under the National Firearms Act (which excludes most common guns) from $200 to $500 and index to inflation and increase the transfer tax for any other weapon from $5 to $100.
The amendment will be voted upon when the House returns for the new session in the fall.
Davis, who represents a portion of Chicago which has been ravaged by gun violence in recent years, said money raised from the new taxes will go to good use.
“This legislation is a pro-active approach to reducing gun violence by using proven preventive programs which have been starved for funds until now,” Davis said. “As part of a comprehensive, multidimensional strategy to reduce gun violence, this legislation closes major loopholes in tax law and lays out an equitable, long term, sustainable strategy to provide the requisite resources.”